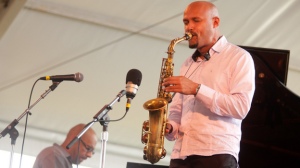 As I noted in a recent post the S.O. and I were fortunate to catch the Miguel Zenon Quartet (Luis Perdomo, piano; Hans Glawischnig, bass; Henry Cole, drums) at Omaha’s Holland Center.*  The group performed an excellent set from what Zenon described as the Puerto Rican Song Book.  The book consists of tunes written by Puerto Rican composers who in Puerto Rico are of similar stature to Gershwin, Berlin, Porter, etc.  I am unfamiliar with these composers, so I’m not sure how far Zenon and company deviated from the tunes, but what I am sure of is this: while the band’s performance on their last album, Esta Plena, was tight, focused, and inspired, the group has improved and reached a higher level of playing.  During the performance it took me a couple tunes before I began to pick up on the incredible amounts of nuance and subtlety.  It took an extreme amount of concentration and focus on my part to pick up many of the details (I’m sure I missed quite a bit).**  The level of communication among all the members of the group is astounding, and as such, the quartet has cemented itself as one of the strongest and creative working groups in jazz today.

The best comparison I can make to describe the group’s level of creative focus and intensity is to invoke the Branford Marsalis Quartet.  I find Marsalis’ group, which is also one of my favorite current combos, to play music that is incredibly difficult and rewarding to listen to, difficult not because it’s bad, or extremely avant-garde (although some may find it too avant-garde), but difficult because they play so much music.  The Marsalis Quartet exhibits a creative weightiness, an unrelenting focus and drive.  Their music is difficult because it challenges the listener in every way: intellectually, emotionally, and physically; it is art music.

The Miguel Zenon Quartet has now reached that incredibly high level of playing.  If you are up to the challenge, you need to check this group out.

To give you a taste of Zenon’s Omaha show, here are two brief, and admittedly fairly low quality clips from youtube from the Omaha performance (they aren’t from me).

The group recently performed at the Newport Jazz Festival, and you can listen to the excellent set on NPR’s website by clicking here (it’s a much more accurate and engaging representation of the group than the two brief youtube clips).  Especially check out Zenon’s solo around the 25 minute mark or so.  The group is augmented by winds, arranged by Guillermo Klein.

* Dear Holland Center: your signs as to how to get into the venue were God awful.  Case in point: we tried to go through the wrong door and almost stumbled through the curtain, which would have resulted us crashing into the bass rig.  Luckily I was able to convince the S.O. that you never ever ever walk through a black curtain at a gig (unless it’s your gig, of course).  The Holland Center folks would do well to lock doors or post signs on doors that are not meant to be walked through.

**The concentration required to fully get into the music was made all the more difficult by the table behind us, which was occupied by three characters, who, if you looked at their appearance, would be the last people you’d expect to be at a jazz concert attended by a primarily high art crowd.  Hopefully this doesn’t come off as snobbish, but they looked like they’d be more likely to attend Sturgis or the national tractor pull championships.  But…that being said, by the basis of their conversations and reactions, it seemed they enjoyed the concert more than a majority of those in attendance.  They were continuously blown away by Zenon, and at one time I caught them, or perhaps they forced me to catch them, having an in-depth conversation about John Klemmer.  On their table were at least two spent “buckets of Bud,” so they were finely tuned up.

The most vocal member of this cohort was taking pictures throughout, and I was actually happy in a way to see people liking and getting into a jazz concert as much as they did, because a lot of times I see a jazz show in a non-club venue the audience is dead, leaving me to wonder if they actually like jazz (the audience’s somewhat muted response at the end of Zenon’s set left no opportunity for an encore, to my disappointment).  He also provided this little nugget, which is a comment I’ve never heard at a jazz show before: “I was about to rip his fucking head off.”  This came after he attempted to go down to a table near the stage, a table occupied by people he did not know.  Apparently they did not take kindly to him joining their table.  Thankfully nobody’s head was ripped off, although that would have been something to see.