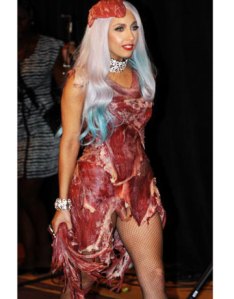 Most Saturday mornings the S.O. and I watch parts of VH1’s Top 20 countdown.  And no, I cannot explain why.  Every once in a while – a long while – there’s a good video (Raphael Saadiq’s “Stone Rollin'” immediately comes to mind) but for the most part it’s stuff I really don’t like, and think is more or less sucky. The fact that I really can’t stand most of what the kids are down for these days further leads me to wonder why I subject myself to things like Jason Derulo’s (I think that’s his name) terrible version of “Day-o” and whatever annoying song it is that Derulo’s fellow Usher clone Pit Bull has.  Perhaps one reason is that I watch to occasionally find videos to show in the classes at KU I teach – because there’s always at least one song on the countdown that can be examined through the lenses of race, gender, class, geography, etc. . . . but I digress….

This week I think #3 on the Top 20 was that fabulous little ditty by Lady Gaga “The Edge of Glory” (this leads me to express my condolences for everyone affected by the loss of Clarence Clemons – you could hear in his solo that he wasn’t doing well, and it didn’t help that he was way down in the mix).  So some of you I’m sure reached Lady Gaga fatigue quite long ago, perhaps some are nearing that point, and perhaps others will not tire of her.  I admit that while I immediately pegged her as an updated version of Madonna, she was – for a time – an interesting figure (the meat dress for example) to watch in terms of gender and spectacle and other things critical theory nerds such as myself get giddy over.  But after watching about 20 seconds of the “Edge of Glory” video I realized I have finally pretty much had it with Lady Gaga and I hope her 15 minutes are close to being up.

This leads me to the point of this post.  I was originally going to put a poll on here, but WordPress, the folks who host this blog, requires one to get a poll account with poll daddy, or whatever it’s called.  I don’t want to do that, so here is a lame poll where you will have to submit your answers in the comment section of this post.  So here goes….

Select the letter that best answers the following question: when do you see yourself reaching the point of Gaga Fatigue?

B. Dude, I have been Gaga fatigued since I first heard of her

C. About the time she got on the bandwagon for repealing Don’t Ask Don’t Tell

E. the fervor that existed before the release of the newest record (see, I don’t know what it’s called either)

G. perhaps in a few weeks

J. (this one is aimed primarily at academics) Who the hell is Lady Gaga?