With You’re Dead, Flying Lotus Puts a Nail in the Jazz/Hip Hop Intersection

You’re Dead—which features an impressive list of musicians including Snoop Dogg, Kendrick Lamar, Herbie Hancock, Stephen “Thundercat” Bruner, and Kamasi Washington—is the end result of Flying Lotus’s seamless amalgamation of myriad stylistic influences. The album is adventurous, complex, and above all, unique in its aesthetic vision and execution. 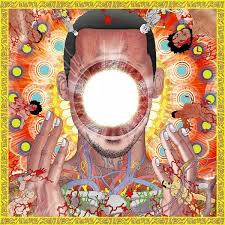 Jazz fans will immediately pick up on Flying Lotus’ incorporation of jazz elements, from Kamasi Washington’s fleet post-Coltrane melodic lines to Herbie Hancock’s fusion synthesizers. Flying Lotus mixes jazz styles in a jarring and unpredictable ways. On several tracks the drummer—either Gene Coye, Justin Brown, or Deantoni Parks—lays down an uptempo swing pattern played with soft brushes rather than sticks. Flying Lotus pairs the drums with Herbie Hancock’s shimmering and flashing keyboards. In theory, that style of drumming is more appropriate for Dave Brubeck’s cool West Coast jazz than 1970s-era Miles Davis and Mwandishi avant-funk. The juxtaposition shouldn’t work, and few would even consider trying it, but it does work, and provides a fertile ground for Washington to weave in and out of the texture.

The most jarring set of stylistic variances in one song comes on “Turkey Dog Coma.” The first third is almost like what the Mahavishnu Orchestra would sound like if it overdosed on prog, and the second features Thundercat and Washington trading lines over a swinging drum set. It ends with a spaced out atmospheric vibe dominated by synths and strings. On the whole, it’s not hard to imagine You’re Dead as the next evolution of the musical language Miles Davis pioneered on Bitches Brew and brought into the twenty-first century.

Compared to his other albums, especially 1983 and Los Angeles, You’re Dead largely avoids a more traditional hip hop world. Aside from Kendrick on “Never Catch Me” and Snoop on “Dead Man’s Tetris” and a handful of cuts with classic, if somewhat understated and occasionally unorthodox, boom-bap, there’s not much the pure hip hop head will hear in common with the hip hop canon.

While experiencing to You’re Dead—especially if the listener isn’t familiar with the rest of Flying Lotus’ work—it is obvious that he listens to and is influenced by an immense amount of genres, styles, sounds, and compositional and arranging methods. One hears snippets of 8-bit video game soundtracks, wonky toy keyboard drum beats, King Tubby style dub zap guns, 1950s atomic-era exotica, the whole of the last sixty years of jazz, and of course, funk and hip hop.

While You’re Dead has obvious instances in which one could isolate the “jazz” part and the “hip hop” part (duh, Snoop is the rap, Washington’s saxophone is the jazz section), it’s difficult to categorize the album as fitting into any particular genre or style. There’s not enough of Washington’s post-bop saxophone to make it a jazz record. There’s not enough guest rappers to make it a rap record. There’s too much acoustic playing to call it an electronica album. Thundercat’s thrashing bass throughout the album is the apotheosis of funkiness, but it’s not a funk record. And there’s not enough boom-bap to place it in the company of contemporary instrumental beat tapes from the likes of Pete Rock, Oddisee, or Apollo Brown. It’s too avant-garde and has too many different references and surprising—and even jarring—juxtapositions to comfortably describe it as an intersection of anything. You’re Dead‘s references and styles are familiar, but only if seen and apprehended through a looking glass and understood as the product of an artist with a capacious imagination and prodigious virtuosity.