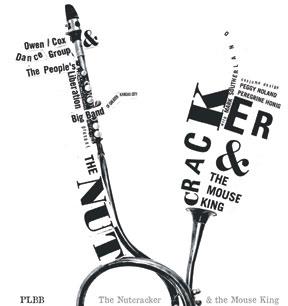 Productions of Tchaikovsky’s Nutcracker has long been a holiday tradition.  In the last few years Kansas City’s Owen/Cox Dance Group has presented its own version.  On the news a couple days before Christmas I saw a brief rundown of the different ways in which dance companies around the country offered the Nutrcracker, which ranged from the very traditional to the burlesque “Slutcracker.”  Chalk up the Owen/Cox production on the non-traditional side of things.  With music by Brad Cox that’s performed by the Peoples Liberation Big Band of Greater Kansas City and choreography by his wife Jen Owen, the Owen/Cox adaptation is a highly engaging and entertaining juxtaposition of avant-garde big band, more traditional ballet style dancing (I think – little help dance folks?), and narration.

This year’s production was fairly similar to last year’s, with some new musical arrangements (I don’t remember any gamelan instruments from last year), and the costumes and set were the same, or nearly the same. What is especially exciting this year is that the PLBB recorded their arrangements of Tchaikovsky’s music and have released it on both CD and digital formats (iTunes or from the label).   To give you an idea as to the PLBB’s take on this music – you’ll hear some sweet 50s R&B, some nasty double kick drum, swing, avant-garde freak out, etc.

Anyhows, In lieu of a detailed review from yours truly, I figured I’d take the kind of lazy way out and ask some of my friends who attended the show for their reactions – so here’s what my friends Jen and Fred and my S.O. had to say about the Owen/Cox production of the Nutcracker and the Mouse King.

My friend Jen: I have seen the Nutcracker and been in the Nutcracker, but never have I enjoyed the Nutcracker as much as I did with the interpretation by PLBB and Owen/Cox Dance Group.  It was an engaging balance of tradition and playfulness – both music and choreography.  Two of the highlights for me were the Arabian Dance and the dance of the Sugarplum Fairy. They captured the way the whole production took surprising, creative and evocative steps to re-envision the Nutcracker.

My friend Fred, who took his daughter Ruby: I had planned for a couple of months to take my six year-old daughter, Ruby, to see this show. Not noticing many, if any, children in attendance at last year’s performance, I had some concerns, mainly about her ability to follow the side story of the Hard Nut, but also about the avant-gardeness of it all.

There were many more children this year, and Ruby loved much of it. Her favorites were the Nutcracker-Marie dance and the tango/bolero-influenced father-mother dance. This dance was very sensual and Ruby kept mentioning the dance with the dad’s shirt off! He is very “ripped” and attention-getting.

I liked the Tchaikovsky Nutcracker and the Ellington arrangements just fine, but Owen/Cox has re-imagined this tale for modern ears and modern attention spans. The shifting genres of each dance in Act II is refreshing and compelling.

Highlights from the music were:

– The Sugar Plum Fairy dance with its steel-guitar/celeste melody and undercurrent of David Lynch menace.

– The gamelan music accompanying the solo dance of one of the toys. I think this was the Arabian movement.

Dance highlights for me were pretty much the same as they were for my daughter, now that I probe my memory.

A couple of other comments are how incredible the costumes were, the weird implausibility of the Hard Nut story, the awesomeness of the Mouse King and his terror-wielding horn, and the band.

I have one criticism of the show. The narration was necessary for this version, but there were some overly snarky lines that I felt were unnecessary. I know why they were there, but putting my mind in the place of my daughter, I thought they fell flat.

My S.O.:  Chris and I have gone to this Nutcracker for the past two years.  I was hoping that it would be as equally enjoyable this year as it was last.  This performance did not disappoint and the music as just as exciting, if not more so than I remembered.

What I find so satisfying about this production is that it eclipses the original.  Perhaps one of the reasons why “The Nutcracker” was a flop when it was originally premiered was perhaps its lack of a story line.  The music is still timeless, but in the original ballet, there is really no purpose to the second act. The story ends with the Nutcracker’s vanquishing of the Mouse King and the entire second movement is check out all of these cool dances.  When you think about it, there really is no need to have a second act except that’s where all the memorable tunes are.  In the Owen/Cox version, the second movement becomes an extension of the story.  Rather than just a collage of dances, the second act serves as Marie’s transition into adulthood.  This addition to the story is what really sets the Owen/Cox Nutcracker from the other imitators.  This isn’t just a re-imagining of the Tchaikovsky, but an entirely different story. After seeing this, it is really hard to go back to the original because there is just this big gaping hole on the existence of  the Nutcracker and how he came to be.