Those who know me, or at the least know my writing, know that I buy way too much music. More than I can hope to listen to more than once or twice and get to really know.

Jean Baudrillard suggests that we collect things because collecting them represents the free time we hope to have to be able to enjoy them. I think he was on to something here. I wish I had the free time that it would take to fully enjoy my album collection.

My New Year’s resolution was to not buy any music until March, which I succeeded at. I was able to resist scratching that itch because I have so much music that I’ve barely, or maybe not even listened to. So, for a couple months I dug out a bunch of LPs and CD, but mostly LPs, that I’ve purchased in the last couple years and not listened to. It’s like record shopping all over again, but without spending any money. Looking at my shelves, pulling things I forgot I had, putting them on my deck. It’s been fun to see and hear all the goodies I haven’t had time to listen to.

I will begin to occasionally post my new finds here as I rediscover them. The first offering is Muhal Richard Abrams’ 1975 Delmark LP Things to Come From Those Now Gone.. I picked this up maybe 8-9 months ago for cheap at a local antique mall and am just now listening to it. 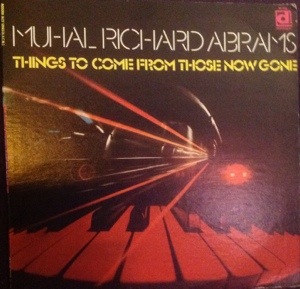 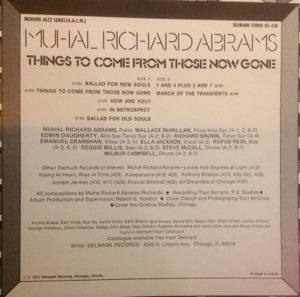 It’s a very diverse album, and as the photo of the back cover shows, there’s a bunch of different personnel and instrumentation combinations. It opens with a haunting flute/piano ballad duet between Abrams and Wallace McMillan. The title track features raucous polyphonic saxophones and two drummers. “Ballad for Old Souls” is a sparse and lovely piano/vibes duet with Emanuel Cranshaw and “1 and 4 plus 2 and 7” is a duet between Abrams (on piano and synth) and drummer Steve McCall.

Overall it’s an evocative, atmospheric, and fairly quiet (as opposed to avant garde jazz which continuously goes to 11) album which fans of Abrams or the work of the AACM in general would enjoy. I’m not as familiar with Abrams’ catalog from this period, and I’m glad I’m finally discovering it. Until the next at-home shopping trip.

2 thoughts on “Record Shopping at Home: Muhal Richard Abrams’ Things to Come From Those Now Gone”